STAMPARTY to The Infinity and Beyond

STAMPARTY to The Infinity and Beyond 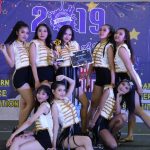 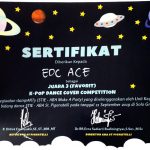 Competitions are an opportunity for EDC to show their existence and ability, also to test the creativity of EDC members. Starting from this desire, the EDC tried to maximally raise the name of the Faculty of Economics and Business to maintain what has been achieved before. On September 21, 2019, EDC Teams of cover dance genres will take part in a competition called “STAMPARTY STIE-ABA Makes a Party” at the Solo Grand Mall.

This competition is a national competition participated by all cover dancers in Indonesia from students, student level and general public throughout Indonesia. The competition which was held on September 21, 2019 had no video selection stage. Instead, they came directly to the competition venue and danced the dance that had been prepared after 6 months of the EDC delegation team doing the training.

Economics and Business Dance Club (EDC) brought 8 delegates and performed cover dance and was able to compete with other participants, so that they won 3rd place. It is hoped that for the following competitions, EDC can regain the championship again and produce and maintain other achievements.